In Depth: How Kazakhstan Distances Itself From Russia to Pursue Domestic Reforms

2022-04-22 09:17:11来源： 财新网
By Lu Chen
2022年04月22日 09:17
The Central Asia nation is attempting a geopolitical balancing act amid the war in Ukraine as it moves ahead with political reforms that include limits on presidential power 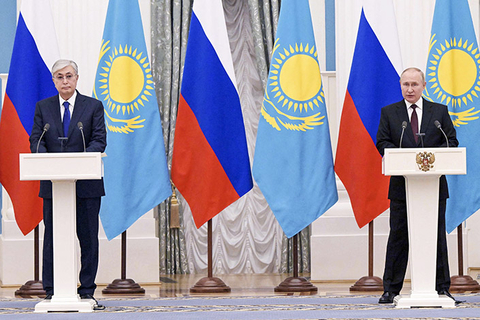 Kazakhstan President Kassym-Jomart Tokayev (left) and Russian President Vladimir Putin give a press conference after meeting at the Kremlin on Feb. 10. Photo: VCG

Since Russia’s war on Ukraine broke out on Feb. 24, Kazakhstan’s position toward the warring nations has shifted, as Central Asia’s most populous country takes stock of the potential impact of sanctions on its economy, and balances its longstanding links with Russia with an ambitious reform agenda developed in the aftermath of civil unrest in January.